Skip to content
Home > Publications > The ‘COVID war’? Reflections on mechanisms and imprints of the COVID-19 pandemic

“We are at war”. This was the message from French President Emmanuel Macron in March as he announced the closure of France’s land borders in response to COVID-191 . From the United Nations Secretary General António Guterres2, to the rare public address delivered by Her Majesty the Queen on UK television3, the Second World War has become the key reference point to convey the scale of the challenge facing society during the COVID-19 pandemic. In the United Kingdom, this has been particularly pronounced with talk of “war bonds”, “blitz sprit” and “spitfires”4. As recently described in a special feature on the UK’s Channel 4 News programme, this pandemic seems to be “amplifying the distant echo of the Second World War” 5.

It is understandable why war language is being used: it is an attempt to rouse and galvanise society; it is imbued with a sense of urgency, making it easier for resources to be mobilised and commandeered, and for sacrifices to be demanded; and it is understood in binary terms (you win or you lose). However – and there is always a ‘however’ – it’s not that simple. Along with those rousing, galvanising and urgent effects is invisible baggage which can imprint over the long term and be socially detrimental.

Many commentators have rightly pointed out the problems with this COVID-19 ‘war rhetoric’. Historian David Egerton highlights the stark differences between conditions of war and pestilence and the dangers of war rhetoric in fuelling myths and fantasies of wartime events6; others point out that this rhetoric only breeds fear7, and can even be used to justify the deaths of health workers on the ‘front lines’8. We share these concerns, and in our work we have highlighted the pitfalls of applying war rhetoric to other challenges such as climate change9. However, we argue it is useful to consider further why it is that so many people are hearing the distant echo of the Second World War.

We agree with Schot, Gosh & Bloomfield10 that the COVID-19 pandemic is a ‘landscape shock’ that is “changing everyday life in an immediate and stark fashion not seen, arguably, since the Second World War”10. The keyword of the moment is “unprecedented”. In terms of its scale and scope this pandemic is different to other recent landscape shocks such as the financial crises. At the time of writing, COVID-19 is present in 213 countries and territories around the world and permeates through all levels of society. No sociotechnical system or indeed individual is unaffected. It directly impacts where and how people can move, sometimes what they can buy, whether they can work, and who they can interact with in their daily lives. Meanwhile, governments have intervened in their citizens lives in ways not seen in peacetime. In short, there is something total about the reach of the COVID-19 pandemic in the way that it has suddenly interrupted and radically altered routines from the level of the individual to international relations.

Our research has focused on the pivotal role that world wars played in the culmination of the first deep transition11. Unlike most analyses of wartime transformation, we focused on sociotechnical systems (energy, food, and mobility), discussing how certain rules (including maintaining an abundant and constant supply) were amplified by the particular ‘environmental conditions’ of the world wars. We found that after the Second World War, these amplified rules persisted as imprints in sociotechnical systems. Part of the challenge of this research was to ‘unpack’ the under-researched ‘landscape’ category of the Multi-Level Perspective (MLP). We did this by, first, building an understanding of the mechanisms of total war and how these differed from peacetime and what effects these mechanisms had on sociotechnical systems; and second, looking at how these effects became imprinted onto sociotechnical systems in the post war era. We think this framework (mechanisms and imprints) is a useful entry point into discussing the potential impacts of the COVID-19 pandemic for the second deep transition.

To be clear, we are not equating the current pandemic with a world war. Rather, by bringing these two events (namely the Second World War and the COVID-19 pandemic) into productive tension, we highlight the differences between the dynamics of these two landscape shocks so as to contribute to discussions that concern the potential consequences of COVID-19 for the second deep transition. 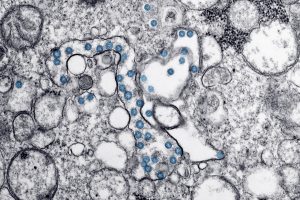